Investing is easy when portfolio values are going up. We hardly notice the occasional market decline and, if we do, we might be tempted to view them as a buying opportunity. And that’s what investing is like in an average year.

But 2022 has been anything but average. Markets have fallen almost from the very start, as bad news kept on coming. We’ve had war in Ukraine, tensions with China, rising inflation and interest rates, a fuel crisis and a cost-of-living crisis — not to mention increasingly bleak reports on the rate of climate change.

Such events are bound to have a negative impact on global stock markets, and that’s precisely what’s happened. But it’s what has gone on in the bond markets that has made 2022 particularly hard for investors.

Normally, bonds act as a shock absorber when equity prices fall. That’s because, generally speaking, the returns of stocks and bonds are negatively correlated. One goes up, and the other goes down; one zigs, the other zags.

Both stocks and bonds have fallen

But again, this hasn’t been a normal year. Both equities and bonds have fallen. Why? Because neither equity nor bond markets like rising inflation; and they dislike rising interest rates even more. Even a small rise in interest rates tends to have a negative effect on bond prices; in other words, prices fall as yields rise. Yet both inflation and interest rates have risen far faster than forecasters were predicting.

As a result, almost all investors have seen a substantial hit to their portfolios. These include the most adventurous investors, with 100% exposure to equities, and the most cautious, with all of their assets in bonds. There was, in other words, nowhere for investors to run or hide.

The chart below provides a perfect illustration of quite how exceptional 2022 has been. It was produced by US-based investment analyst named Charlie Bilello and shows the annual performance, since 1928, of a balanced portfolio with 60% exposure to the S&P 500 index and 40% to ten-year Treasury bonds.

As of the end of September, that portfolio had fallen 21% since the start of January. That’s the worst performance since 1931. Put another way, what we’ve witnessed in the financial markets in 2022 is almost a once-in-a-century event. 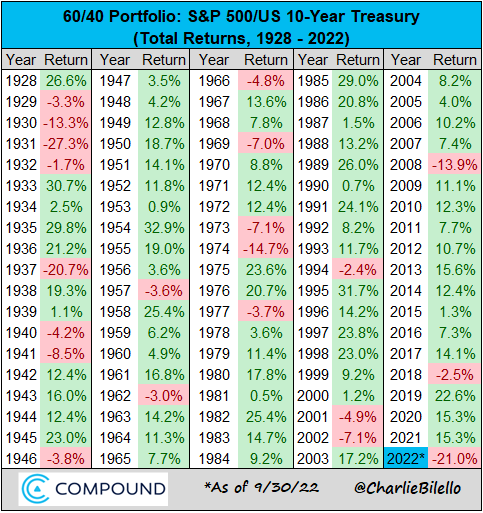 Of course, the year is not yet through. The situation could improve between now and the end of December, or it could get even worse. Either way, there’s no escaping the fact that the last nine months have been exceptionally tough.

Periods such as this tend to accentuate our behavioural biases, and two in particular.

The first is recency bias. Investors, in short, are far more influenced than they should be by recent experiences, and they assume that current trends will continue into the future. Right now, for example, when the financial pages are full of doom and gloom, the danger is that we expect the status quo to last indefinitely.

The second bias is loss aversion. Simply put, loss aversion is the observation that investors dislike incurring losses more than they like making gains. So today, for example, investors who are smarting over the losses incurred in recent months may be less inclined to invest in the financial markers than they normally would.

The role of regret

A common strand that connects these two self-defeating biases is regret. We regret past decisions and any losses we feel we may have incurred as a result of them. And we’re very keen to avoid regret in the future. So, for example, we want to wait to see the bottom of a bear market before we venture back in.

But regretting the part you think you may have played in the losses you’ve incurred this year is completely illogical. Nobody has a crystal ball, and no one could have predicted with any precision the way events have unfolded — much less the impact those events have had on the markets. It’s not your fault, and it’s not your adviser’s fault either. You have no control over the global economy or the financial markets, and nor do they.

It’s also irrational to be overly focused on avoiding regret in the future. The key, as the Nobel Prize-winning economist Daniel Kahneman has explained, is to seek a balance between minimising regret and maximising wealth. That means planning for the possibility of regret and understanding clearly the range of possible outcomes beforehand.

Of course, there is no one right answer here and that’s because every investor is different. It’s also why it is so important to have a financial planner who can map out the range of eventualities and test clients’ potential reactions to each one.

There’s no disguising the fact that 2022 has been a hugely challenging year for investors. But it needs to be put in its proper context. Good years for investors far outnumber the bad ones. And, if history is any guide, most of us may never experience as tough a year as this again.

The best advice, then, is to stay calm and rational. Sooner or later, the acute discomfort investors are currently feeling is bound to pass. So don’t let it derail your long-term strategy.